Heaven is declaring God’s glory;
the sky is proclaiming his handiwork.
One day gushes the news to the next,
and one night informs another what needs to be known.
Of course, there’s no speech, no words—
their voices can’t be heard—
but their sound extends throughout the world;
their words reach the ends of the earth.

Wonders and Glory
Have you ever been absolutely
stunned by God?
I mean
brought-to-your-kneesflabbergasted,
flummoxed,
dumbfounded,
or
come to the abrupt conclusion
that God was in fact — God?
And then looked around yourself
with the realization
that the WOW that is God
dwells in all that is:
every living and breathing creature,
every grain of sand,
fleck of dust,
sparkle of starlight,
breath of life,
gasp of death,
cosmic motion,
lover’s smile,
or dreamer’s tear?
Have you ever
looked at a star,
blade of grass,
morning sunrise,
or heard the
call of a quail,
the breeze through meadow grass,
roll of thunder
and known,
I mean just known
that God is, was, will be
not just God,
but your God — forever?
Have you ever?
Evidently this psalmist did.
If it is possible
that you have never heard
or seen,
or forgotten you have,
I encourage you take the time,
pay more attention,
And let God blow your mind…

Abram was ninety-nine years old when the LORD appeared to him again and said, “I am God All-Powerful. If you obey me and always do right, I will keep my solemn promise to you and give you more descendants than can be counted.” Abram bowed with his face to the ground, and God said: I promise that you will be the father of many nations. That’s why I now change your name from Abram to Abraham. I will give you a lot of descendants, and in the future they will become great nations. Some of them will even be kings. I will always keep the promise I have made to you and your descendants, because I am your God and their God.

The Limits of Human Imagination
Genesis 17:1-7

Can you name a few things that you
can’t quite
bring yourself to believe?
There are some people
who are totally credulous
and will believe
anything any friend might say:
that the Moonlanding was fake
and staged out
in the Arizona desert;
or the earth is flat;
that women are
not as smart as men
because their brains
are smaller.
Pick a nationality,
race, gender, social class,
and you’ve heard
some unfounded
and salacious garbage
about their character.
Rumors and gossip
always tell me
more about the individual
spreading them
than about
the ones at whom
they are aimed.
But here,
today,
we read about another kind of
unbelievable,
inconceivable
tale.
A story so implausible
and so far
beyond the imagination
the even the person
to whom it happened
found it hard to believe.
A ninety-nine year old
fathering a child?
Wow!
It was a promise kept by God.
It was beyond comprehendible,
but it came true,
and I am led to ask,
what promises has
God made to us?
what do we think of
people who claim
that God makes them promises?
Have we ever experienced
the unimaginable?
It is crazy, you know,
to think that God
would make us a promise.
It is still crazier
to think that God wouldn’t.
Can you bring yourself
to imagine God’s
promise of eternal life?
Can you imagine the healing
stories of Jesus
being real?
Can you imagine hope?
Can you even imagine
the consequences
of the sharing of
bread
and cup
at the Communion Table?
I think we should
be careful about the limits
we place
on our imaginations.

Still,
so many do not heed the call.
We want to help
others to become healed,
yet we
seem to stay unhealed.
We resent
being thought of as in need of healing.
We become angry
at the notion that we might be broken.
We resent being named.
We refuse to do
the work of our own restoration.
Why is it that
it is alright for Jesus to touch,
heal, renew, recreate,
step into another’s
history, space, life,
but it is meddling
when it comes to us? 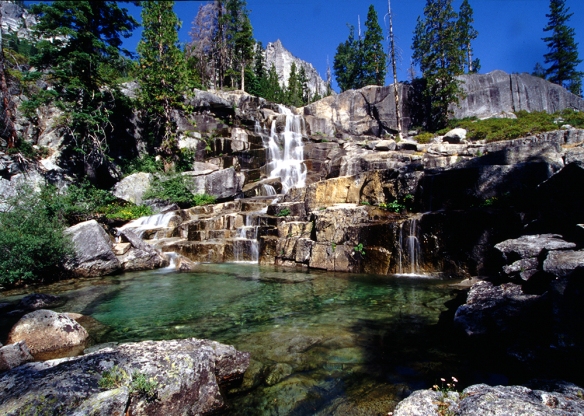 A Place for Retelling

Called to speak.
Called to listen.
Called and answered.
Called and chosen.
Threatened —
by God —
do it right or else!
This book
has an interesting history.
Deuteronomy is purportedly
a “lost” book
found
after the Exile of the
Hebrew people
to Babylon.
It had been hidden,
and turned up mysteriously,
then
“found”
by the new order of ruling priests.
It is full of laws,
holiness codes,
and or-elses from God.
The strong suspicion
by some biblical scholars
is that the
“finders”
actually
wrote it themselves
as a means of establishing their
own power and rightful leadership
in a community torn
apart by being exiled from,
then returned to,
their homes.
Homes that after 60 years
just did not exist anymore.
There is something powerful
here about this
re-construction of hope.
Something worth paying attention to
in the re-telling of old stories.
Remembering that these are the words of priests,
not so much Moses, or God,
we can then see
a desperate attempt by to build hope
and re-construct a sense of place,
of home.
The Hebrew people thought that they
needed these stories to build their
national and personal
self-worth.
This is revisionist history,
and in and if itself
is less than the best way to facilitate healing.
History happened.
Life happened.
Still there is something compelling
in re-telling a story with a different outcome.
Not to actually history,
but to change
how we can change our own outcome
with a different telling.
There is healing in imaging
ourselves surviving trauma
and emerging strong,
not wounded.
I am not promoting denial,
rather exploring a
re-storying where our victimhood
changes into strength and energy
and inner power
and strength.
What stories do we need for this?
How do we need to revision our old stories?
What do we need to hear
that bolster us
in times of distress,
when we feel dispossessed
out of luck,
unloved,
and short on hope?
Who will we listen to
in an age of “false news”?
Who has been called, chosen,
to tell us these stories
we need so desperately to hear?
Do we need stories of conquest?
Are we seeking stories of greatness?
Or,
is it a story of hope,
of love,
of salvation and
fulfilled promise
that we so desperately need to hear?
How would we re-write
our old stories
so they reflect
our own heart’s desire?

John 1:43-51
The next day Jesus decided to go to Galilee. When he got there, he ran across Philip and said, “Come, follow me.” (Philip’s hometown was Bethsaida, the same as Andrew and Peter.) Philip went and found Nathanael and told him, “We’ve found the One Moses wrote of in the Law, the One preached by the prophets. It’s Jesus, Joseph’s son, the one from Nazareth!” Nathanael said, “Nazareth? You’ve got to be kidding, can anything good come out of Nazareth?” But Philip said, “Come, see for yourself.” When Jesus saw him coming he said, “There’s a real Israelite, not a false bone in his body.” Nathanael said, “Where did you get that idea? You don’t know me.” Jesus answered, “One day, long before Philip called you here, I saw you under the fig tree.” Nathanael exclaimed, “Rabbi! You are the Son of God, the King of Israel!” Jesus said, “You’ve become a believer simply because I say I saw you one day sitting under the fig tree? You haven’t seen anything yet! Before this is over you’re going to see heaven open and God’s angels descending to the Son of Man and ascending again.

Can Anything Good Come?

Judgment and stereotyping,
regionalism, nationalism,
arrogance
and good,
old fashioned xenophobia,
right at the beginning of
Jesus’ ministry—
directed right at Jesus.
Credulous, bigoted, knuckleheads.
And those are the ones
who became his disciples!
WOW!
“You’ve got to be kidding,
can anything good come out of Nazareth?”
Or Africa,
or Haiti,
or Mexico,
or San Salvador,
or, or, or?
Well the disciples found out,
didn’t they?
But what about us?
Are there those areas,
places, towns—
nations,
where we arbitrarily
discount
those who are living there?
I have heard many,
some of us even,
refer with ugly claims
to those who come from
the Res, Lake County, Nice,
anywhere other than Geyserville.
Meth heads,
crack heads,
trailer trash,
weirdoes.
That’s where the heroin addicts hang out.
Yet,
we are referring to human beings,
the ones
Jesus loves as much
as he does us,
those who carry the Christ
as do we,
deep in their beings.
The main difference
between us and
Jesus
is that he could look
into the hearts of all
and see nothing
but goodness and grace.
But do we not owe it
to ourselves and to others
to see that same
grace in all?
And if we did,
what might we discover?
Maybe that the Messiah
was walking alongside
of us
all along.
Now that would be
something to miss,
wouldn’t it?

To conclude my poem-journey this week of a poem a day. I am using past work from around 1972 that was written after a cold night in the Sierra. It indeed infers an inner spiritual movement — awareness of body, awareness of God/Nature/God-in-nature. The awareness of that unknown entity we understand as that-which-cannot-be-named-known-or-described… nonetheless, discovered in unconditional love of small creatures — death, and the sacredness of summer’s sun…

TO THE SUN
© Hilary F. Marckx, all rights reserved

You have melted me—
Like summer-heat snow-melt,
I seem to no longer stand
inviolate
against a safe winter’s sun.

You have melted me—
I pour,
fluid-like stream
from my ice-high eerie,
and my dissolution
floods stream-hollow channels.

You have melted me—
and I do not recognize
this I have become:
mist to
sky–breeze-blown vapor.
I seek life
in your heat.

You have melted me—
I reach out
to touch
that which was not
yet. and
I feel heart-heat pulse beat
where once
ice-locked
and protected

To continue my poem-journey this week of a poem a day. I am pulling from past and new work that infer an inner spiritual movement — awareness of body, awareness of nature/God-in-nature. The awareness of that unknown entity we understand as that-which-cannot-be-named-known-or-described… nonetheless, discovered in unconditional love of small creatures — and death.

In the Ice of Time

I discovered grim symmetry
in winter’s freeze.
Tangle of
winter-bare willow.
Rabbit,
raptor-killed-gray
on white-frozen earth:
concentric circles of death
with one red eye
staring death
at center of corpse–
this raptor was
neat–and cautious.

Frozen earth,
soil beneath low branches
of bare willow, where still figure
draws me in.
Circle of fur, two-foot diameter,
shaven from rabbit’s belly
Lays out about carcass.
Death in the round,
warmth near-frozen
in fog-white mirror for earth.

One tuft of fur at a time
shaven from belly in
three-hundred degree circle
of wary movement.

Three inch round red plate of red meat
in center of carcass steams off
last remembrance of life.
Blank eye of rabbit looks at nothing,
and at me, as though I too
have blood on my teeth.
As though I too
might lay belly-bare
on frozen ground–
fodder for some raptor.

I thought: “Here is the glorious beauty
and the
symmetry of my own death.
If I could but die in
solidarity with the cosmos…”

A POEM, A REFLECTION, & A PRAYER
Create a free website or blog at WordPress.com.